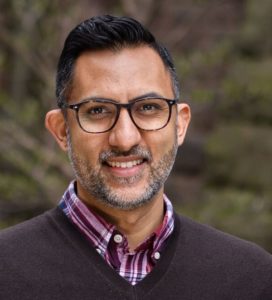 Vineet Chander is an Assistant Dean in the Office of Religious Life, tasked with directing the Hindu Life Program and serving as Hindu chaplain, at Princeton University.  He has also served as an adjunct professor, attorney, and communications consultant. His  areas of specialty include Bhakti, the Bhagavad-Gita, models of pastoral counseling, faith development in higher education, and the Hindu-American diaspora community. He is the co-author of Hindu Chaplaincy (Oxford Centre for Hindu Studies, 2017), and Hindu Approaches to Spiritual Care (Jessica Kingsley Publishers, 2019).

As the nation’s first full-time Hindu chaplain and program director in higher education, Vineet‘s work with Hindu-American students at one of the world’s premier educational institutions affords him a unique vantage point and powerful experiences from which to draw. Vineet‘s work with the Hindu-American community is also unapologetically autobiographical– he is a second-generation Hindu American, who was born and raised in New York City and discovered his own faith calling in his youth.

Vineet earned his Juris Doctor degree from the George Washington University Law School and his MA in Religious Studies at Rutgers University, under the tutelage of Professor Edwin F. Bryant. He has also studied the theology and praxis of  Hinduism’s Chaitanya Vaishnava tradition in a number of traditional ashram settings in both the United States and India. To further his personal and professional development, Vineet is currently a doctoral candidate at New York University, where he has been appointed the inaugural Vera and Sam S. Jain Fellow in Vedanta Studies.

Vineet and his family live in Princeton, New Jersey.